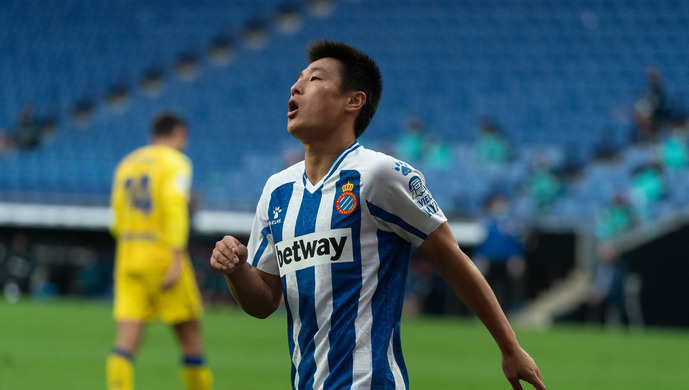 On October 11th, Beijing time, Chinese player Wu Lei continued to start in the fifth round of West Division B. The Spaniard defeated Alcocon 1-0 at home and temporarily topped the West Division B standings with 4 wins and 1 tie. 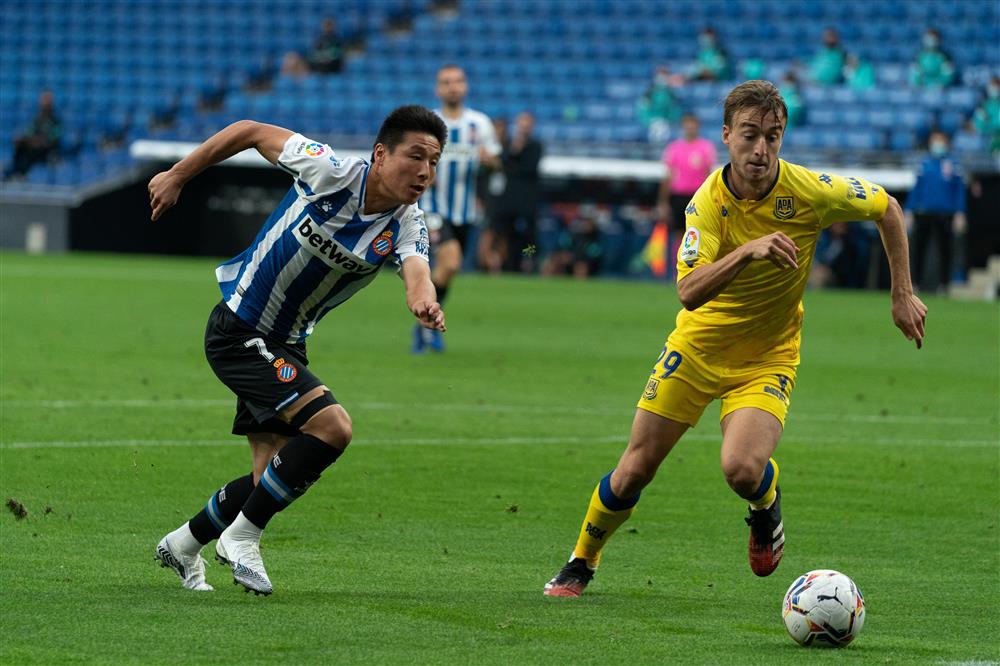 Many Chinese fans who like Wu Lei were a little displeased: First, Wu Lei was replaced at halftime in this game; second, Wu Lei failed to score in four rounds and suffered a goal shortage. In my opinion, Wu Lei as a forward must of course continue to pursue goals, but compared to the big goal of the Spaniards returning to La Liga as soon as possible, Wu Lei under the current lineup configuration does not seem to be that important.

Of course, what Chinese fans are most concerned about is Wu Lei's performance. In the first five rounds of West Second Division, Wu Lei has entered the main lineup of the Espanyol, and is the only player to start the game in the center and front field.

Caption: Wu Lei had limited shooting opportunities in the first half.

Against Alcocon, the Spaniard coach Moreno produced a 442 formation in this game. With De Thomas as the double forward Wu Lei, he had two good chances in the first half.

In the 32nd minute, De Thomas passed into the penalty area with a free kick from the front court, and Wu Lei headed wide in the open. In the 36th minute, De Thomas’s shot from a small angle was blocked by the goalkeeper Alcocon to the small penalty area, and Wu Lei’s high-speed shot was confiscated by the goalkeeper under the interference of the opponent's return guard. After that, Wu Lei also flopped a header from the back point. De Thomas was pushed down from behind by his opponent, but the referee did not call the penalty kick. 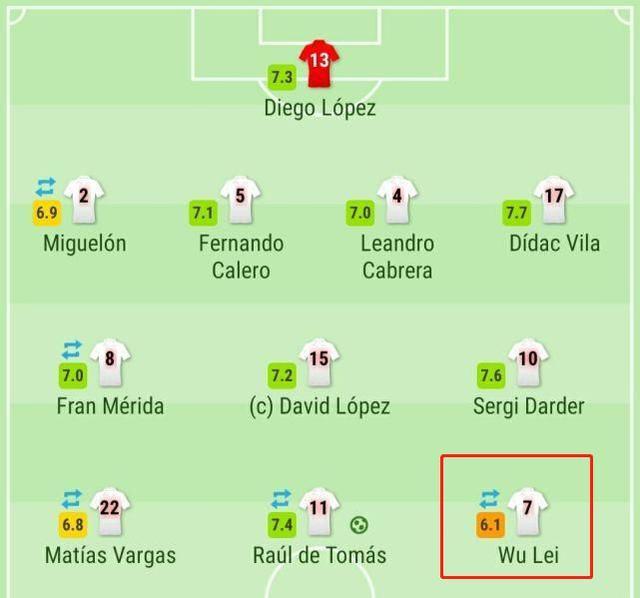 The Spanish coach Moreno made a substitution decision during the half-time break. The 19-year-old Melamed replaced Wu Lei. Only played 45 minutes, becoming Wu Lei's five-round minimum playing time. In the second half, the Spaniards scored in the 75th minute with De Thomas's goal, a small victory.

La Liga played 5 rounds, the Spanish team performed well and currently ranks first. However, Wu Lei’s personal performance is suspected of driving high and driving low. Since surrendering 1 goal and 1 assist in the first round, Wu Lei has been conscientious in the next four games and also created scoring opportunities. The ball rubs shoulders with regret. 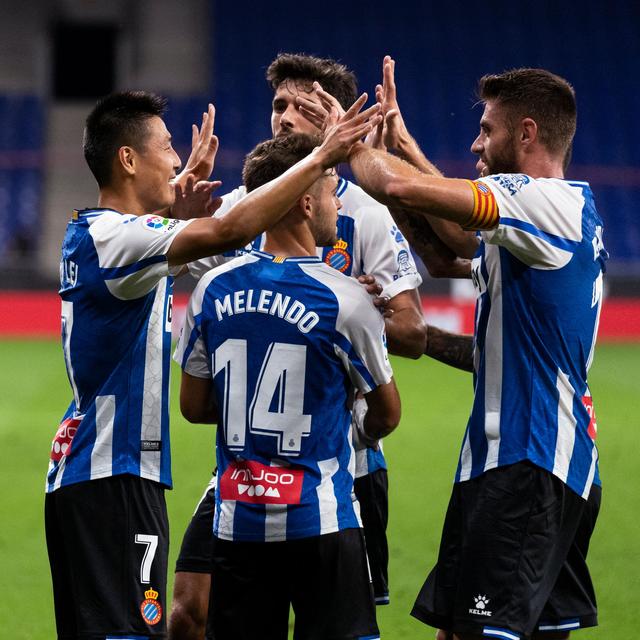 In La Liga, the Spaniard is a weak team and basically plays a defensive counterattack. At this time, Wu Lei is relatively easy to play his own characteristics of fast speed, interspersed behind opponents, and more flexible running positions. Wu Lei scored wonderful goals against Barcelona last season, which is enough to prove. Now playing in the second league, the Espanyol is the most valuable of the 22 teams: the total value of the team reaches 110 million euros, and it is the only "rich" in the second division with a total value of more than 100 million.

In the face of the powerful Spanish team on paper, other Spanish second opponents will definitely not choose to attack, but based on defense. At this time, Wu Lei's technical characteristics of dexterity interspersed, quick start, and use of the gap behind the guard, lacked enough room for display. In addition, now Wu Lei's ability to have the ball is weaker than that of the off-the-ball. Once the ball reaches the foot and requires more processing, Wu Lei's advantage is not obvious. Once the offensive space is narrow and the opponent is fiercely guarding, Wu Lei can only use the side he is not good at to attack: such as dribbling breakthrough, hard carry, header contention, etc., the opportunity is relatively small.

In the author’s opinion, Wu Lei has struggled in the second league, and there is another important reason: Compared with the previous forward partner Iglesias, the Spaniard center De Thomas now lacks the ability to catalyze the chemical reaction of his teammates. ability. 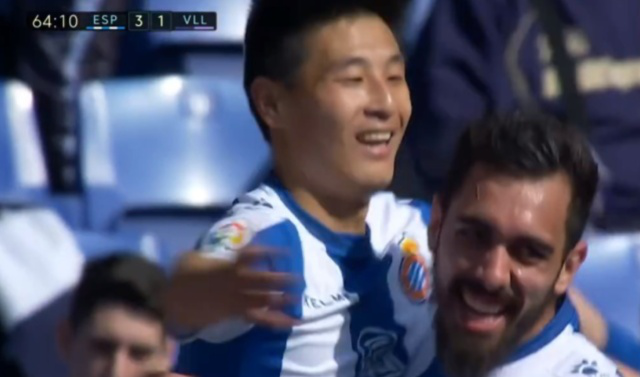 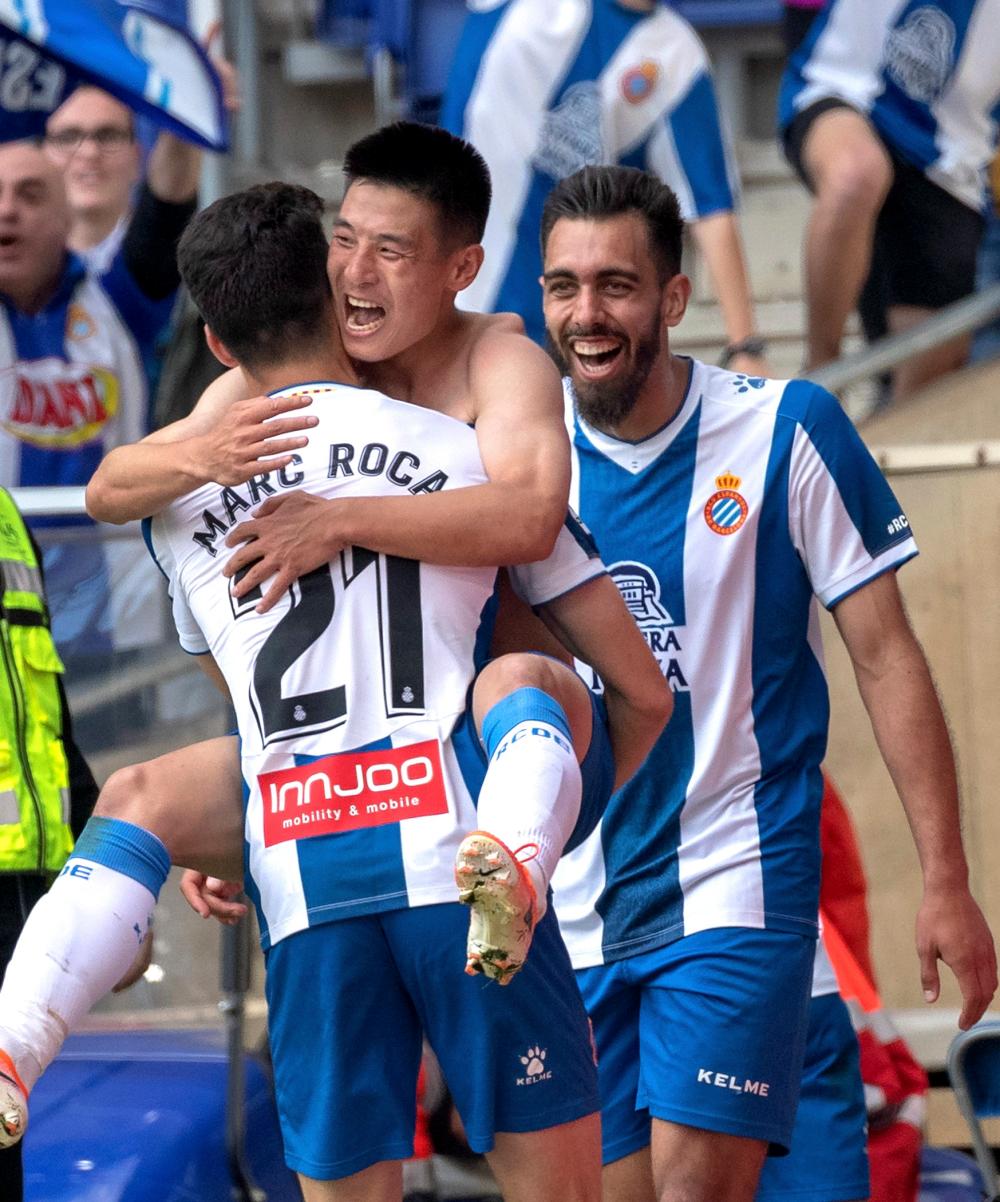 Caption: Two teammates who are more willing to pass for Wu Lei, both moved to leave.

After Wu Lei joined the Spaniard, the most comfortable period of time was his first season with Iglesias. At that time, the Spaniard's striker formed a classic one-high and one-fast combination: Iglesias could take the ball, break through, and was willing to play for his teammates. He scored 20 goals this season. The "Panda" style of playing in line with the modern football trend also helped Wu Lei gain a firm foothold in the first year of La Liga and helped the team return to Europe after 12 years.

In fact, the Spaniard’s relegation last season was, in the final analysis, the club’s misoperation to pay tuition: for a small salary negotiation gap, the club neither retained the meritorious coach Ruby, but also sold the most useful center Iglesias. , The team's strength is greatly reduced. Although it has spent a lot of money to introduce center De Thomas to try to fill the hole, the style of the monarch is too unique, not up to the ability of the predecessor Iglesias, and a little bit of worry. For Wu Lei, the striker lacks a cooperative partner with tacit understanding and willingness to cooperate. 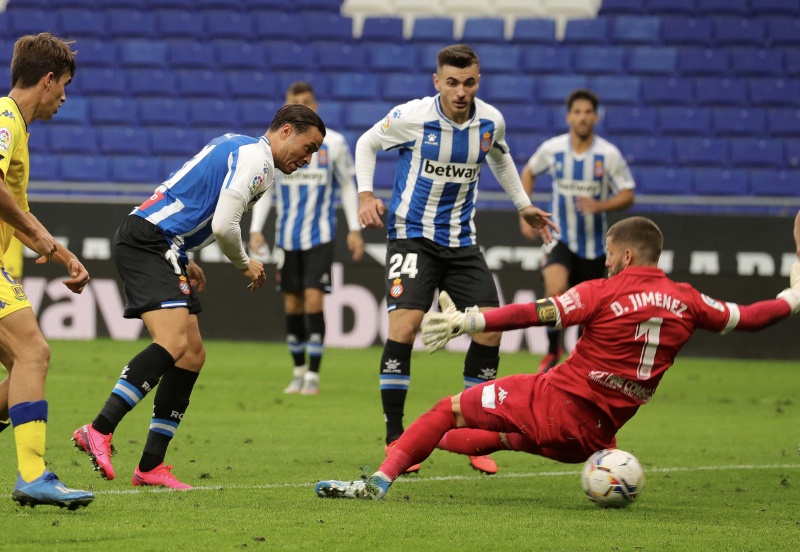 Football is always a team sport, and cooperation is more effective than singles. Wu Lei’s temporary scoring shortage in the Second Division also stems from the fact that he and De Thomas are point-grabbing strikers. There is a suspicion of overlapping styles. More importantly, De Thomas’s style is too unique. He and the striker are basically both partners. Do not call each other".

Wu Lei played relatively unselfish football, not occupying the ball right, focusing on passing the ball to his teammates, but he also needed his teammates to pass the ball and the center forward to attract firepower to seek scoring opportunities. As the team's most valuable De Thomas, he plays the so-called "core football." In the few West Division games I watched, De Thomas basically didn't pass the ball for Wu Lei even his teammates. Today, he has scored 3 goals and is indeed the first scorer in the team, but this kind of ball has a lone wolf style of play. Of course, he can brush his personal data and bring it against opponents of average strength. 3 points, but the chemical reaction to the team's overall offense is not very helpful. 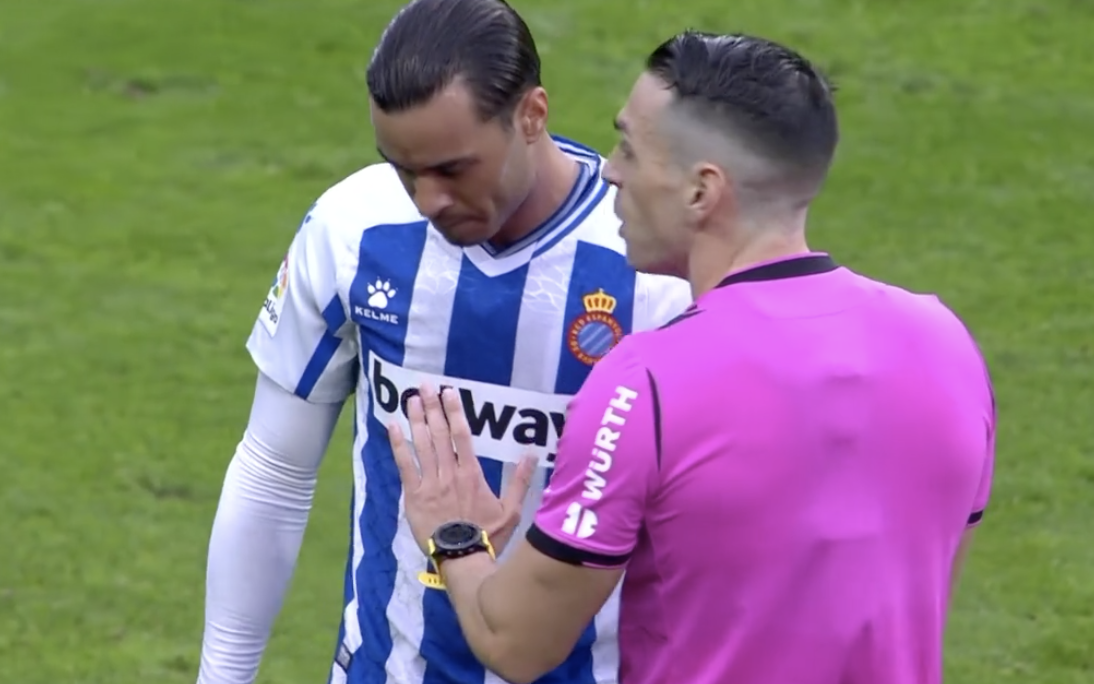 442 double forwards or 433 formation configuration, the tacit cooperation between the offensive players, each other is particularly important. Regrettably, De Thomas’ style of play not only occupies almost all of the front court of the team, but also refuses to pass the ball for his teammates. Today's Wu Lei, in the final analysis, is giving De Thomas a hand, even eating "leftovers." Of course, the emergence of this scene is not Wu Lei's problem, the coach also needs a comprehensive balance-this is the after-effect of the club's series of "god operations" last season.

In fact, it is normal for a striker not to score a shortage temporarily. Griezmann had 0 goals and 0 assists in Barcelona's 3 games, but returned to the national team and scored again and again. In the final analysis, this is a problem with the tactical system. For Wu Lei, he needs to further improve his strength, seize opportunities to improve efficiency, and also try to learn how to coexist with teammates with different styles. Of course, both Wu Lei and the Espanyol club should understand: Compared with the player's individual scoring data, the team's smooth return to La Liga is obviously more important.